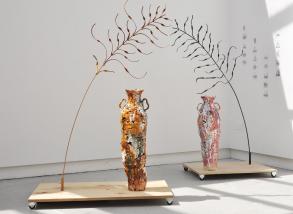 1. Tell us about yourself, your work, and your career path so far.

Originally, my practice grew from my love of every aspect of working with clay: its tactility, its versatility, its beauty and even, from time to time, its downright frustrating unpredictability. During my time as an undergraduate I began to create and develop a series of ceramics centred round the time-honoured form of the vase or urn, pushing it as far as I could in different directions that are transgressive and unexpected. The results can be seen in my series of vases which subvert the familiar theme of the emoji, sometimes using it ironically or provocatively, sometimes stretching it out of its own banality and forcing it to express genuine emotions. Another thematic thread of my practice explored the notion of ‘sloppy art’, where – artfully – the aim is to produce objects that don’t appear to rely on conventional ideas of craft, such as finish, smoothness or symmetry. This has led me to produce pieces that – while retaining the essential character of the vase – defy the usual expectations of what a vase looks like. As I have gone down this route, individual pieces have become larger and larger, and I’ve had to learn new techniques in constructing and firing, experimenting (with more success than I had any right to expect!) and developing original ways to overcome the problems involved. During an inspirational and fruitful Erasmus placement at the University of Art and Design in Linz, Austria, I came to realise that I was nearing the point where I should seek new avenues down which to develop my practice, and I took up the challenge of working sculpturally with metal, learning to weld and bend. I am currently producing work that combines the contrasting mediums of clay and metal, and exploring ways of expressing the creative tension that exists between them. This has opened up a whole range of new possibilities and challenges, for which I’ll need to acquire different skills and understanding of the potential of metal. I’m excited and eager to push on with my new ideas, put them to the test and find out where they take me.

2. Describe your first encounter with clay.

My first experience with clay was a strange one! I was visiting Stoke-on-Trent with my family to see the potteries. We went to one of the studios where they were running a kids workshop. I was presented with a slab of clay in which I plunged both feet, submerging them to create an impression. I wrote my name and age on it, and I still have it to this day; well – my mother does! And it’s not even fired, so I’m surprised it’s lasted… but that vivid experience has stuck with me ever since. I suppose you’d say I went in feet first.

3. Why did you choose ceramics?

Well, I want to say that ceramics chose me. When I first started using clay I used to be very precious about what I made and thought that clay was a fickle friend. I could never be sure of conquering my glazing, and I struggled with throwing too. This was while I was in college, during this period I’d occasionally attend evening classes with my mother at a studio run by ceramicist Claude Frere-Smith as part of the Roseberry Ceramics Group. Id throw on the wheel, but discovered my love of hand building after a few sessions. It wasn’t till later in university when I decided to specialise in ceramics and sculpture as part of my degree at Bath Spa University. My love for clay and ceramics grew steadily from then and clay has been at the centre of my practice ever since

4. Where do you find inspiration? Places, people, objects, music...

I find inspiration comes from all directions, often when I’m least expecting it. Naturally, I really love visiting museums and looking at the artefacts. The British Museum is outstanding, and I recently visited the Ashmolean in Oxford which is another inspiring place to gather ideas.  Most of the shapes of my vases derive in one way or another from Egyptian, Grecian or Roman vessels. But as I’ve said, I gain a lot of creative stimulation from unusual things that catch my eye. I tend to take a lot of pictures on my phone, and if I’m experiencing an ideas drought I’ll look through my Instagram (where I store images of interest to me) or go through the photos on my phone often using instagram as a scrapbook. Music also plays a part when I’m working - not necessarily as a direct inspiration, but it gets me in the mood for making, for sure. I’ve been listening to a lot of Kate Bush recently, which has resulted in some very poetic pots… I’d like to think so anyhow! Inspiration for glazes normally comes from B&Q.  I like to wander down the paint aisle and gather the little images of the different colours. I try and choose three or four colours that complement each other, then decide on a different recipe for each glaze, alternating between satin, matt and shiny (my current favourite) glazes. I enjoy introducing an element of surprise, so sometimes I’ll add a random glaze that I’ve never used before…risky I know, but I like the way when it’s applied as a thick surface to a pot it gives it more character.

5. What are the tools of your trade that you can't do without?

My hands and brain are my best tools, I suppose. I really don’t use physical tools that much because I’m a hand builder. Over time, I’ve developed my own technique of making, where I form little patties of clay in my hand and simply join them with water, simply squeezing the two parts together. I let the walls of my vases take their own shape to a certain extent, as I like to build very fast and sometimes the clay will lead my fingers, rather than the other way round. When making my pieces, I enjoy celebrating the true – the natural – characteristics of the material by allowing the clay to sag or bulge and twist under its own weight.

6. What is a typical day in the studio like?

My day generally starts with some quick sketches, then straight into the making.  I don’t mess around! I’m quite a hands-on sort of girl.  If I’ve a vase in mind to make I just go with the shape I’m thinking of and roll out a slab of clay, cut two circles and start to make, building up bit by bit. I tend to create two vases simultaneously; this is because it helps with the drying time. I can work on one vase while the other dries. Once I’ve built up maybe half way, I’ll leave it overnight, covered to firm up, before continuing on the vases the next day. Then I make some glaze tests or go to metalwork and start making the leaf to accompany the vase I’m making. Or I’ll enamel some of my emoticon vases to bring them to life.

I’ve been lucky enough to secure a studio space in bath at the 44AD studios as the Network of Creative Enterprise resident, which is fantastic. I’m also working towards a few exhibitions of my work. One of them will be at the OXO Tower on London’s South Bank – that’s been put together by myself and some of my fellow students on Fine Art and Contemporary Art Practice at Bath Spa. There’ll be sculpture, painting and photography on view, as well as ceramics. Then there’s another at The Minories Galleries in Colchester, and following that a show in Whitley Bay, organised by IOUAE, who support graduating and emerging artists in the North East. So the short answer to your question is ‘a lot’.

8. What advice do you have for those currently studying ceramics in further education?

Get your work out there. Take any opportunity you can to push your practice further. Don’t be afraid to test yourself and the material. Be irrational and spontaneous. Be inspired by your peers, take on criticism but also challenge it as well.  Give yourself time to reflect on you creative decisions (AKA - take a break). And most of all enjoy yourself.