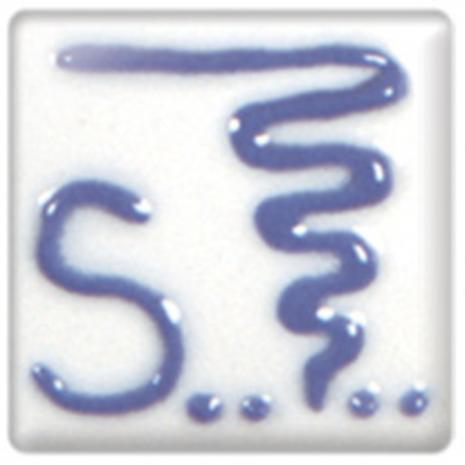 RAC 0-16 - Raised Accent Colors (RACs) are slip-based colors (or engobes) which are available in 2 oz. applicator pens with a fine metal tip for decorating on greenware or bisque. They create embossed or raised designs on ceramic decorative work because the colors do not flatten out when they are fired. They are also available in 16 oz. squeeze bottles, which can be used to refill the pens or which can be used for other slip trailing applications.

PREPARATION Each 2 ounce RAC squeeze bottle comes with a separate metal tip. Before using the pen unscrew the black plastic cap and remove the liner from inside the cap. After screwing the cap back on the bottle, take off the clear plastic cover. The black plastic tip has a small hole which can be used without modifications or, if you want to make thicker lines, carefully cut a small piece off the end of the tip with a sharp knife or scissors in order to enlarge the hole. If you want to attach the metal tip, in order to make finer lines, you will need to cut approximately ¼ inch off the end of the black tip. This will provide a fat enough end to screw the metal tip onto.

HOW TO USE THEM Before using the pen on your ceramic piece, first shake the pen vigorously and then test the flow by squeezing some of the slip out on a piece of paper. This should remove any air bubbles and establish a consistent flow of slip. If the slip has become too thick to flow properly, unscrew the black plastic cap and pour 2 or 3 drops of water into the bottle. Then replace the cap and shake and test again. When you are using the pen on a piece of greenware or bisque, hold the pen tip in contact with the piece. It makes it easier to control the writing than holding the tip above the piece and dropping the color onto the surface. Also the slight scratching of the surface improves the bonding between the slip and the piece. Do not hold the pen directly vertical while writing because this leaves no gap for the liquid to flow out of. Hold the pen at an angle to the surface so that there is an opening for the slip to flow through. Because the slip is quite thick you must write more slowly than with a pen. This allows time for the liquid to flow through the tip. You can create a large variety of line thicknesses by varying finger pressure and writing speed. The harder you press and the slower you write the thicker your lines will be.

HOW TO KEEP THE METAL TIP FROM PLUGGING The liquid in an RAC pen is a type of colored slip and like any other slip it will harden in the pen tip unless you do something to prevent it. We recommend taking a staple from your stapler and straightening out one end to use as a reamer to push into the metal tip. It is helpful to leave the staple in the tip when the pen is not in use to prevent clogging. When you are finished using the pen for the day, the metal tip should be removed from the plastic nipple and the clear plastic cover replaced on the bottle to prevent the pen from drying out. Also when you have an empty pen you should clean it out and fill it with water. After you have finished using a metal tip you should screw it onto the pen filled with water and squeeze water through the tip to clean it out. Letting a used tip soak in water will help prevent hardening and plugging.

HOW TO REFILL AN RAC PEN In order to refill an RAC pen, you first unscrew the black plastic cap from the top of the bottle. Then using the 16 ounce RAC refill bottles you squeeze more of the same color slip into the bottle. Since the slip is quite thick you may need to tap the bottle on a hard surface a few times as you refill it to get the liquid to settle to the bottom of the bottle.